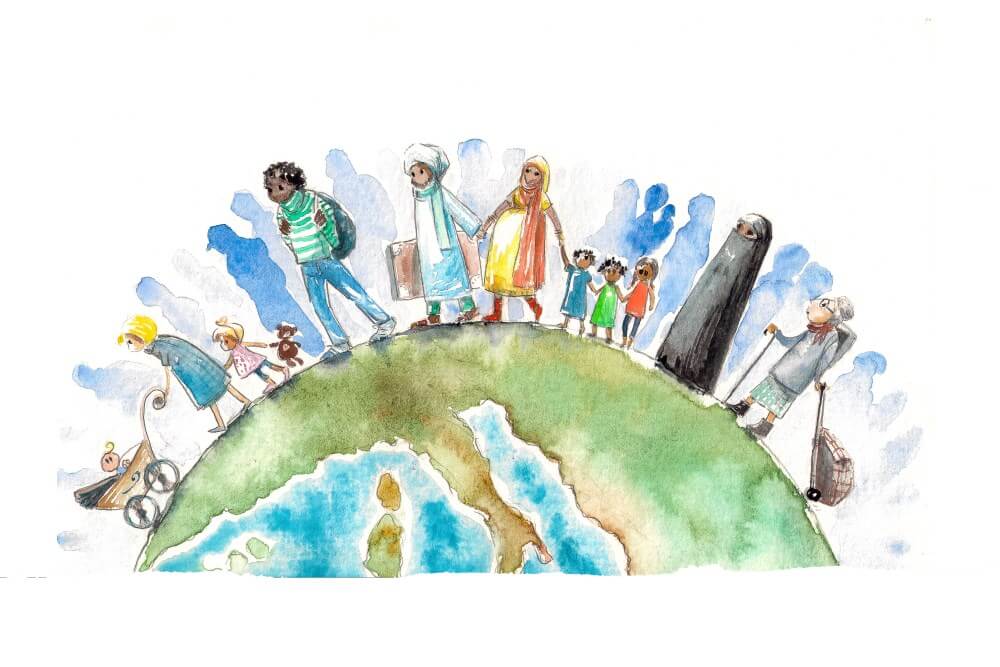 For some families, living in another country is a wonderful adventure. Especially for those who’ve never traveled outside of their homeland, it can be an incredible opportunity to expand their worldview and receive exposure to other cultures.

For others, a move overseas isn’t so glamorous. If a family has to move due to factors beyond their control, international living can be stressful or even oppressive.

In a globalized world, numerous reasons exist for families to make a new home in another country or culture, and the most common are:

For any family, the experience of living in another culture or country is deeply impacting. Each person’s perceptions, values, and understanding of others change. In the process, their identity shifts as well.

They become an expatriate, refugee, migrant, asylum seeker, or immigrant — these are just some of the terms used to describe global nomads, depending on the reasons for living internationally.

An article by The Atlantic explores the differences in these terms and the way they can reflect class structures and economic differences. Often, expatriate describes financially advantaged westerners traveling for adventure or business who will likely return to their passport country eventually.

The terms migrant or immigrant usually describe those seeking a better life and those more likely to stay in another country permanently. They also tend to be used for those who adapt more fully to a host culture by learning the language and blending into the community.

Children who live internationally for at least six months during their developmental years have a special identity of their own. They have been called several terms, including cross-cultural kids (CCKs) or third culture kids (TCKs). Research has shown these children as having unique strengths and weaknesses, with those characteristics continuing into adulthood.

Read more about children who have lived internationally at the World Family Education page about Cross-Cultural Kids, Third Culture Kids, Global Nomads…What Are They?

For many families, living internationally is a life-changing opportunity that gives them exposure to another world. Expatriates often have amazing experiences, and many of them develop a love for the nomadic lifestyle. Blogger Iceland with a View describes several reasons why living internationally is empowering, as it germinates personal growth, builds confidence, and grows a love for travel. Another writer at Club Global describes the benefits of having a fresh start and discovering friends from many places.

For some, living internationally means having an upgraded lifestyle. In several surveys, expatriates describe their experiences glowingly, and ratings for health and happiness are higher than those reported for friends and family back home. One example posted at The Telegraph showed expatriates reporting greater wealth and a lower cost of living in their new location.

Despite the many benefits of living internationally, challenges can also abound. It’s not easy to navigate the differences of another culture, and a language barrier can complicate those difficulties even more.

A common difficulty that global nomads face, especially when first moving to another country, is culture shock. It’s normal to be surprised and even dismayed with cultural differences in another country. Sometimes a family will even feel they’ve made a terrible mistake. But usually this feeling is temporary and will dissipate after an adjustment period.

When returning home, the (former) expat is often surprised to find themselves a stranger in their own country. The expatriate finds the once familiar, unfamiliar.

Grief can also be significant for those missing friends, family, the comforts of their homeland. The loss of community support can be debilitating for some. It can also be difficult to watch their lives continue on without you via social media highlights, emails, and telephone calls.

At the same time, finding new community in a new location can be daunting. Social isolation is a hurdle for many families living internationally, and requires proactive effort to seek new relationships.

Those in the role of a trailing spouse can experience these challenges more deeply. This term describes spouses who follow their partners internationally due to business or work obligations. Often the trailing spouse leaves behind community, careers, or support networks as they move abroad. Their new-found isolation combined with an absent husband or wife who works long hours can lead to significant problems, such as loneliness, depression, and marital conflict. A helpful article that explores this topic more deeply is by Ayilah Chaudhary at Al-Jazeera: “‘My identity went’: Mental health issues torment trailing spouses.”

For those returning to their home culture, “reverse” culture shock can be a surprise. Global nomads usually expect their homecoming to be a fairly easy transition back to the life they used to have, but oftentimes it just doesn’t happen that way. Friends and family have moved ahead with their lives, and the culture seems different than before.

The challenges of repatriation are described at BBC.com, and helpful advice is offered for those facing reverse culture shock at Families in Global Transition.